A study published in Developmental Cell by the Kodjabachian team reveals how multiciliated cells are distributed at regular intervals in the Xenopus embryonic epidermis. 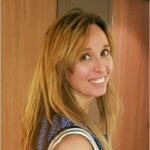 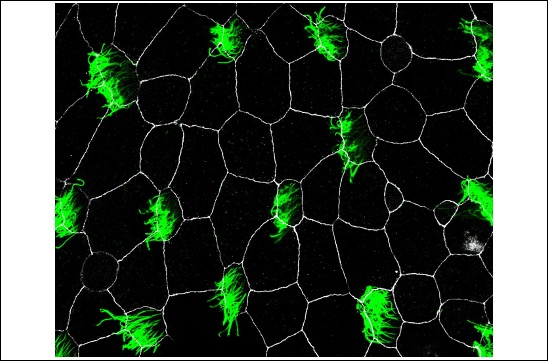 A study published in Developmental Cell by the Kodjabachian team reveals how multiciliated cells are distributed at regular intervals in the Xenopus embryonic epidermis.

In the tadpole of the Xenopus frog, as in other aquatic animals, thousands of multiciliated cells are inserted at the surface of the epidermis and act as brushes, thanks to the coordinated, high-frequency beating of their cilia. This generates a powerful water flow over the surface of the tadpole, which flushes out surrounding microorganisms. To ensure an optimal defense, multiciliated cells are distributed at regular intervals. How on earth do they do that ?

The researchers observed that multiciliated cells are born in the inner layer of the epidermis in a disordered pattern. Within a few hours, the entire population is homogeneously distributed, before beginning its intercalation in the surface layer. By filming these cells, they found that they project extensions and repel each other at each contact to keep their distance. At the same time, they associate to junctions between surface cells to prepare for intercalation. The authors confirmed by mathematical modeling that these two behaviors are sufficient to confer a regular distribution to a disordered cell population.

The scientists then established that the couple formed by the Scf ligand, produced by surface cells, and the receptor Kit, expressed by multiciliated cells, is necessary and sufficient for the deployment of these two properties. The membrane version of Scf provides anchoring at cell junctions, while the soluble version, which bathes the epidermal tissue, is necessary for repulsion between multiciliated cells.

Let’s digress a little ! In Covid times, if a group of individuals are asked to spread out in an enclosed space, they will move to separate, typically at arm’s length, or by using visible landmarks, such as tiles on the floor, just as the cells responsible for defending the tadpole against infections do.

It is fascinating to see how self-organization within a group of cells or a group of people, faced with the same challenge, can imply simple and convergent solutions.

10 IBDM projects have been selected for funding by the ANR

Self-organisation of human muscles in a dish

Human muscle cells self-organise into defined fiber bundles in vitro even without the presence of external cues !

Gene expression dynamics during the awakening of the zygotic genome

A PhD position on the robustness of cell fate specification Self-organisation of human muscles in a dish

Human muscle cells self-organise into defined fiber bundles in vitro even without the presence of external cues !